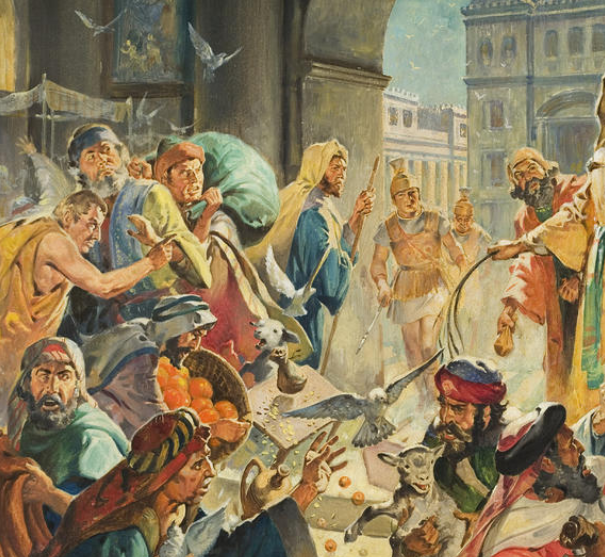 Picture a man who sits on trial, falsely accused, and does not utter a word. Imagine a man who puts up no fight at all – who does not even scramble or protest – as he is tied up and dragged to an excruciating, graphic, and utterly unjust execution. A man who stands the ultimate temper test; who speaks words of love to his executioners as he hangs, skin shredded, on a depraved instrument of torture. I think of this, and then remember, for the umpteenth time, that this man of unwavering self-control, of the deepest-seated compassion, once threw a massive fit. What in the world incited him, in all his impossible serenity, to compose a whip of cords by hand, and slash his way through temple courts, throwing over tables, yelling and shouting?

As I envision the cows and sheep stampeding out, and money-changers scrambling for their scattered coins, I realise this 30-year-old pacifist had found the one thing worth yelling about.

“Stop turning my father’s house into a marketplace!”

The more I turn it over in my mind, the more I realise: My reading of this story has been perniciously obscured by the system I live in. Subtly, but dangerously, I came to see this text as a sort of purity remark about temple practices. You ought not to be buying and selling where you should be praying, just as you ought not to be chewing gum, or whispering in the church pews. It’s about due reverence. Respect. Decorum. Perhaps a comment on greed.

But this must be wrong. First of all, the physical temple building was not something with which Jesus was deeply concerned. So alien to him was this pharisaic obsession, that he had few qualms about the imminent destruction of the whole place. He saw Himself and the Church as replacing it. Second, Jesus was the ultimate challenger of that particular brand of customary law: “Don’t do this, in this holy place, on this holy day.” Or, as Paul put it, derisively, “Do not touch, do not taste, do not handle.” It was not at all central to His ministry to think or speak in such terms. Certainly not central enough to warrant the only recorded physical fit of a man with enough temper control to hold still and die.

No, His heart was somewhere else. When Jesus cried, “Stop making My Father’s house a marketplace”, He was making a comment about marketplaces.

All these people were doing was buying and selling. Trading. As you or I would trade. We can paint them as Shylocks, weeding out their pound of flesh, but this is our bias; so protective are we of our marketplace that we cannot bear to see it as the target of Christ’s anger. “He is mad at the traders”, we think, so that we can confine his wrath to a time and a place and a type. But this was not so. Jesus was saying, “There is something enragingly incongruous between your dove-selling and My Kingdom.”

“Do not turn My Father’s house into a marketplace”, he pleas, because a marketplace is, synonymously, “a den of thieves” – a bad thing.

And the more I think about this, the more firmly I realise it. For all the evangelical love of the market, Jesus saw the marketplace as something utterly substandard. Earthly. Unclean. In a way he did not see eating with prostitutes, feasting, drinking, partying, Sabbath work, touching the contagious, or speaking to a woman alone. He didn’t shout or whip or throw over anything like that. Temple or not. Instead, Jesus threw tables over money.

This fits a wider picture. Not only did Jesus devote more words to money than anything else, with 16 of 38 parables; not only does scripture as a whole contain less than 500 verses on faith, but over 2000 on money, trade and property; but ordinary marketplace practice is also responsible for the only time God smites a man to death in the New Testament.

That story is in Acts. It begins with the early spirit-filled Christians holding everything in common. Why? Because the Father’s house – the temple, now the Church – is not a marketplace. One man, Ananias, puts a great deal of his money into this common collection, for use by all. But he keeps a little bit of it as his private property. And God, who is that feisty 30 year old, cracking his whip through the market place… just strikes this guy dead. Kills him on the spot. It’s the same Heart, the same Spirit, the same Anger. The same Person. And it means that, apart from Revelation prophecy, the only two New Testament instances of divine violence, are for ordinary marketplace practices. (Side note for the non-Christian reader: Humans definitely didn’t come up with that).

We should stop here and ask a very grave and serious ‘why’.

Why does the marketplace – this owning and buying and selling – fail so dismally by the standards of the coming Kingdom? Why does it fill the King of that Kingdom with such immense, righteous anger? Why does our beloved free market, our precious right to property, bear such a prince’s portion of this wrath, when even His own murderers maintain his unyielding love and compassionate concern. When he can hang in agony, look into his executioner’s eyes, and plead desperately, ‘Father, do not hold this against them; do no harm to them at all; they don’t understand what they are doing”?

The marketplace cannot exist in the Kingdom, simply because we cannot assent to its very first claim. We cannot look at Jesus and say: “I believe in ownership at cost to another.”

He will turn to us and reply: “If a man asks for your coat, give him your shirt as well.” What space, then, for buying and selling?

This is the market’s failure in immediate terms. The rigidity of the market, where nothing is free, and so nothing is love, stands in firm opposition to the man who says, “If asked to walk one mile, walk two.”

But the reason for Jesus’s fiery gaze at the marketplace is deeper than this. Market thinking obscures His power of analogy.

God’s kingdom does not operate like the marketplace, and in order to understand and share it, we simply cannot be market thinkers. If we are market thinkers, the consequences as we communicate the gospel are nothing short of devastating.

Consider the gospel for a moment: “Everyone gives up everything they value, which is worth nothing, gaining all things valuable for free in return, from the owner and producer of all things, who voluntarily dies for the weak and unsuccessful.” The gospel – precisely because it is love – breaks the market along every dimension.

The reason God is so intensely critical of ordinary marketplace practice is that if we cannot escape the paradigms of the ordinary market, we will not only tear each other and ourselves to shreds, but we will be unable to understand or share the gospel. More specifically, more wickedly, we will commodify the contents of the gospel. By doing so, we will make the truth incomprehensible – and God inaccessible. It is that serious.

And God was absolutely right to talk about this constantly. And Jesus was right to throw tables. Right to make an example of Ananias. Because even with that – even with all this unambiguously thematic wrath – we did it. We commodified it.

That madman is worthy of our worship. But first we must know and accept who He is: the man who will stand silent as you kill Him, praying for your peace, but who is coming for your marketplace with a whip in His hand.