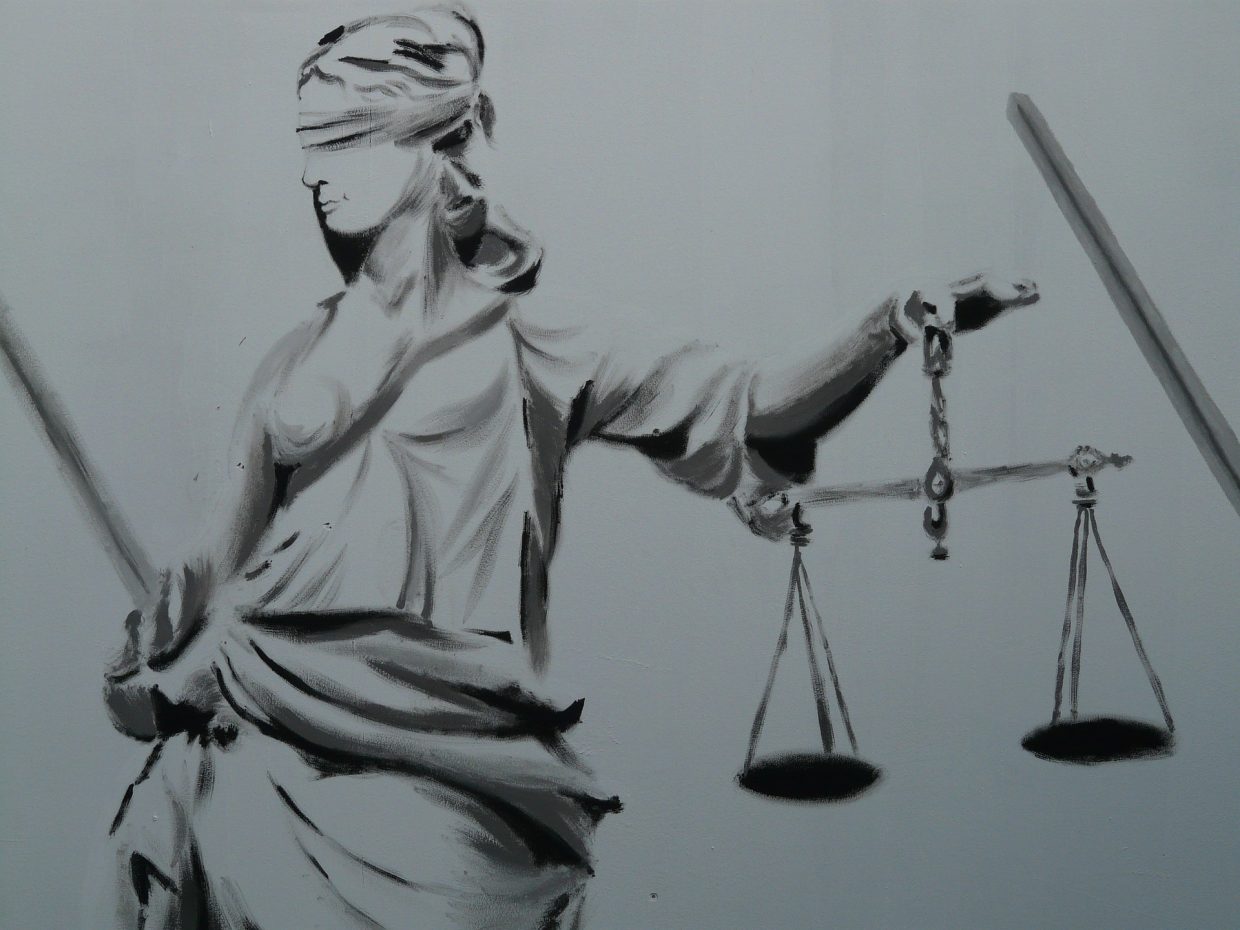 Imagine taking your very first breaths in the stench of poverty. Three siblings came before you, yet are nowhere to be seen. One by one, each was carried into the woods and abandoned – by the mother who now carries you home. There, a hell-scape awaits you, of alcoholism and violence too dark to picture. Horrifically abused. Locked up, naked. Made to eat cigarettes. Beaten in the groin, with a baseball bat.

But today, this moment, Abu sits on death row. He will be executed by the State of Tennessee.

I first heard these stories from Dan Mann, a faraway friend I very much admire. Dan was once a leader in the evangelical world, knowing every big name from evangelical rock-stars to evangelical bestselling authors. Even when the Vatican held a worldwide ecumenical conference, Dan represented the face of evangelicalism. The label, in all its American glory, was fundamental to who he was.

After 30 years, the political scene of America threw Dan into a shattering crisis of faith. As his confidence in evangelicalism plummeted, he began to ask what a faith of love and action, rather than words, might look like. It was then he discovered that just 5 miles from his home, on Tennessee Death Row, the forgotten were waiting to die.

When hearing of Abu’s sentencing, one of the first questions conjured is, “What did he do?” Upon discovering that he isn’t a depraved or psychopathic serial killer, the question is simply, “How is this possible?” In simple terms, the defence attorney assigned to Abu’s case offered nothing worthy of his job title. No mention was made of those dark nights locked in the closet. No mention was made of Abu’s dissociative disorder; the regular blackouts he developed as a defence against phenomenal pain. No mention was made to the misconduct of the prosecution, of which conclusive evidence was available. His legal ‘assistance’, free for the poor, was straightforwardly incompetent – and, for that, Abu is going to die.

Larry McKay, Dan’s first ever friend on death row, offers another example. Larry was once one of 20 children in an impoverished home. His first incarceration was age nine – most thereafter were for theft and drugs. In 1983, Larry was convicted of double homicide and sentenced to death. He was found with the murder weapon, which he insists was purchased in a pool hall after the homicide took place. Other than possession of the murder weapon, there was no physical evidence linking Larry to the crime. During his time on death row, Larry has learned to read and write, and spends much of his time doing what any of us might in his shoes: trying not to die. Law book after law book, Larry is determined to one day overturn his conviction. Meanwhile, he sits alone. Of his 20 siblings, just one visits – and even that, just once a year.

Larry and Abu are just glimpses through a keyhole; gateways to a bigger and even more disturbing picture: the implementation of the death penalty is overwhelmingly a question of privilege. Wealth inequality means, and has historically almost always meant, that the rich can afford good legal care, while the poor cannot. Rather than standing aloft over these discrepancies, courts are perilous places for the poor, who are frequently served the peasant’s meal of wrongful conviction or excessively cruel punishment.

Indeed, the entire justice system of America caters to capitalist fallout – fines, bail, private prison systems, unequal access to education and mental health care, and wealth-determined legal care. It requires little argument to show that this is not really a justice system at all. No one gets the death penalty for plummeting thousands into destitution with culpably wicked banking practices, precisely because anyone who can commit such a crime is wealthy enough to begin with. As with anyone who sends thousands to their deaths in needless wars, or commits murderous war crimes on tape. Just take a look at Maury Davis, the white, millionaire, pro-death penalty pastor who savagely murdered a woman in a death-row state and now happily runs a massive megachurch – despite having been convicted, and with far stronger evidence than ever applied to Larry.

If any of these claims seem hyperbolic, consider that 12% of those given the death penalty between 1976 and 1999 were represented by, “an attorney who had been, or was later, disbarred or suspended–disciplinary sanctions reserved for conduct so incompetent, unethical or even criminal that the state believes an attorney’s license should be taken away”. In Washington, this figure was as high as 20%, while the ordinary rate of disbarment is well under 1%. Moreover, in Alabama’s death row system, convicted parties have no free legal care through which to appeal judgements. And in all other states, free post-conviction care is capped at an inadequately low rate, while the wealthy can simply spend the requisite thousands.

Consider now the fact that 95% of death row inmates come from underprivileged backgrounds. Is it really so easy to say that the poor just commit all the violent crimes? Apparently not.

Coins are not the only thing to tip justice scales in US murder trials. Rather, the US death penalty can never be fully understood without a proper grasp of America’s racial history.

Around the same time as my own parents were growing up in the gritty world of apartheid, Dan Mann’s parents were growing up in the strangely similar world of mid-1900s America. For all intents and purposes, Mr and Mrs Mann were not partakers in this devilish landscape of racial violence and segregation. In the late 1940s they had moved to Ohio because the KKK had burned a cross across the street from their home in Bartow, Florida. And when his mother had organised a game of ‘ring-around-the-rosy’ at a company picnic there, she had invited the black children to participate. “So that proved it. They weren’t racist.” And in 1959, Dan Mann was born to these parents of the deep South.

As the 1960s hit, race became top news. They locked their doors as they drove through the black part of town. Martin Luther King was dubbed a communist. George Wallace seemed a good candidate in 1964 and 1968. “Separate but equal” seemed sensible. At length, Dan’s parents sent his siblings to Bob Jones University – the foremost fundamentalist, segregationist school in the country.

It wasn’t until his college years, when he began working with black neighbourhood kids at Wednesday church events, that he began to realise how much this upbringing had corrupted his own perceptions: “They gave me grace, when I didn’t even know I needed that grace”. He couldn’t see it before – the racism of America was psychologically engrained, written into the nation’s birth-right and carved into its mountains.

Understanding this deep-set racism is crucial to understanding the application of the American death penalty. Death row verdicts are capriciously and arbitrarily dealt, disproportionately targeting low income African Americans. Crucially, the bulk of this discrimination expresses itself on the victim side: You are more likely to get the death penalty for murdering a white victim than a black victim. And how can we be surprised at this, when in 9 of the death penalty states, Tennessee included, an incredible 100% of the prosecutors are white?

It seems that the present day and the 1960s are not so far apart. Just as Dan’s parents allowed faith and racism to lie together in uneasy company, so too does modern America. Just as they failed to see their own inconsistencies and biases, so too do the judges and executioners of the death-row states. The spirit of racism is alive and well in the administrations, departments, and courts currently sending over 2000 citizens to their deaths.

But even wealth, race, guilt and desert, are not perhaps the fundamental issues.  At least on my own account, a Christian one, the gravest evil to be found in the barbaric practice of death sentencing is that it forsakes mercy, deems a man irredeemable, and needlessly ends a human life forever. We are not the Fates: When we toy with life, cutting strings, we do not know at all what we toy with. We did not choose to bring it into the world. We cannot count its value. It is inviolable, inalienable, precious beyond measure, sacred to the touch. And what strikes me most thoroughly when hearing Dan’s stories is just how preciously humanity – this invaluable, irreplaceable thing – shines through in each of his inmate friends.

Take Abu. Abu is the type to lead, always speaking with authority. He had once overheard Dan speaking about the Spirituals of Mahalia Jackson, and wanted to know “what a white guy like him knew about Mahalia Jackson”. They laughed together, and Abu recalled how, as a child, he had learned to sing by laying on the floor listening to her records – thus, a friendship was born. On Dan’s birthday, Abu painted him a picture of a wood duck. And when Dan came back from a period of travelling, Abu met him at the door:

“Where have you been? I’ve been waiting on you! Do you see anything different about me?”

Instead of answering, Abu reached into his shirt and pulled out a cross: “You and I are now brothers.”

Abu has had several execution dates and is expecting one to be passed down for this year.

Larry, by his own admission, was a mean guy when he arrived on death row. Yet, by the time Dan met him, he could only be described as a caring, loving man, who laughs often and considers anger a waste of time. Departing the prison, Dan can always expect a hug – and a “You know I love you!” calling after him. We are putting a man who says that – who means that – to death.

Once, Dan asked another inmate, Derrick Quintero, why Larry always called him Taco. He thought it was because Derrick was Hispanic.

“No – You know those Taco Bell commercials? Run for the Border – Taco Bell – Taco.”

As he was explaining it, Derrick hung his head in embarrassment.

Derrick looked up in surprised pride. “I got 20 miles, one time!”

This humanity is not the goodness in people alone, but the unique swirling mix of their good and their evil, trying and testing our will to have mercy; to glorify love over blood. Take Skillet, another inmate friend of Dan’s. Asked about his name, Skillet told Dan it was because he liked to wake up every morning and listen to the gospel group ‘Skillet’. So, Dan put his mind to it, using his evangelical connections to persuade the band to send him some gifts of encouragement. No one told Dan any different, until one day, reading his case, he realised a skillet was the murder weapon.

“So sometimes,” Dan said to me, “even when we’ve been convicted of murder, we desperately want others to see us in the most positive light.”

It’s broken, and it’s messy, but it’s human. The same brand of human from Wall Street to Death Row.

Post-Trump, Dan dropped the evangelical title altogether. The king of Christianity is Christ, who stood between a woman and her stoners to say: “You who is without guilt cast the first stone.” Who calls the traitor son home with open arms and the finest robes. Who invites thieves, and cheaters, and murderers for hugs, and feasts, and restoration. The imperative of forgiveness and a lasting opportunity for redemption is indisputably central to the gospel, and any Christian, in particular, must – with absolute priority – yearn for this with all their heart. Since hearing his stories, I so often think of Dan’s daily question: “Jesus came for the guilty. So what have you done for the guilty today?”

So, as you wander away, carry some thoughts: